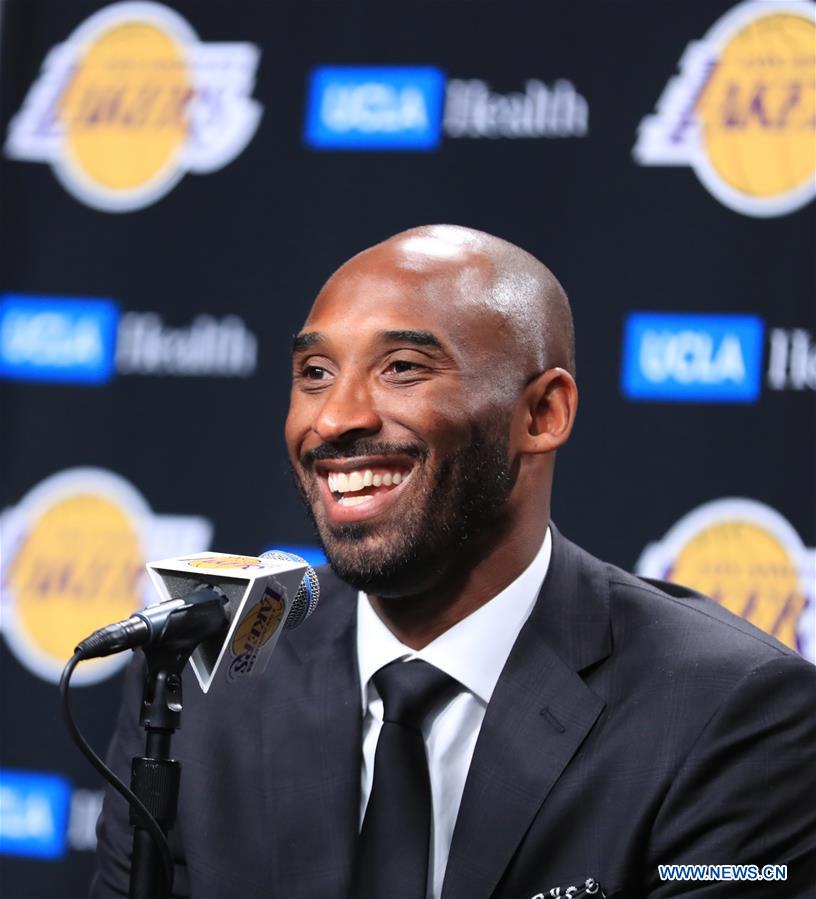 The file photo taken on Dec. 18, 2017 shows Kobe Bryant speaking during his jersey retirement press conference in Los Angeles, the United States. Retired NBA star Kobe Bryant was one of five people killed in a helicopter crash in Calabasas of southern California on Jan. 26, 2020. (Xinhua/Li Ying)

LOS ANGELES, Jan. 26 (Xinhua) -- Retired NBA star Kobe Bryant was one of nine people killed in a helicopter crash amid foggy conditions in the hills above Calabasas, southern California, on Sunday.

"It is with great sadness that we learn of the death of Kobe Bryant and four others in a helicopter crash in Calabasas," the City of Calabasas confirmed on its official Twitter account early afternoon. The Los Angeles Lakers legend, five-time NBA champion and 18-time All-Star died at the age of 41.

The aircraft went down in a remote field off Las Virgenes around 10:00 this morning. Nobody on the ground was hurt, the city tweeted.

At a press briefing later in the afternoon, Los Angeles County Sheriff Alex Villanueva said that nine people were aboard the crashed helicopter - a pilot and eight passengers.

The Sheriff did not identify anyone on the flight, saying it was entirely "inappropriate" to do so at this time until the coroner made the identification to the next of kin. U.S. media TMZ first broke the tragic news of Bryant's death, which was later confirmed by other media including CNN.

Authorities received a 911 call of "a potential helicopter down and a brush fire" at 9:47 a.m. and firefighters arrived on the scene to find that the crash had caused a quarter-acre brush fire in steep terrain, said L.A. County Fire Chief Daryl Osby at the press briefing.

The fire also included magnesium, which is very hard for firefighters to extinguish because magnesium reacts with oxygen and water, he said.

"We know there are many questions, unfortunately the investigation will be lengthy, and it will take a great deal of time to get those answers," Sergeant Benjamin of the Sheriff's Information Bureau tweeted.

The U.S. Federal Aviation Administration (FAA) and National Transportation Safety Board are investigating the crash, and the Los Angeles County coroner's office is working on retrieving the bodies and identifying the victims.

According to Los Angeles Times, Bryant's daughter Gianna Bryant, 13, was also on board and died. Bryant was on his way to a travel basketball game with his daughter when the helicopter crashed. Those aboard the helicopter also included another player and parent.

"A S-76 helicopter crashed this morning under unknown circumstances near Calabasas, Calif. Local authorities say that five people were on board. Please check with local authorities for more information on the condition of the occupants," the FAA said in its statement.

"Kobe was a legend on the court and just getting started in what would have been just as meaningful a second act," former U.S. President Barack Obama tweeted.

"Kobe Bryant was a giant who inspired, amazed, and thrilled people everywhere with his incomparable skill on the court - and awed us with his intellect and humility as a father, husband, creative genius, and ambassador for the game he loved," Los Angeles Mayor Eric Garcetti tweeted.

"He will live forever in the heart of Los Angeles, and will be remembered through the ages as one of our greatest heroes. This is a moment that leaves us struggling to find words that express the magnitude of shock and sorrow we are all feeling right now, and I am keeping Kobe's entire family in my prayers at this time of unimaginable grief," Garcetti said.

The Grammy Awards are set to be held later Sunday at Staples Center, where Bryant played in the NBA for the Los Angeles Lakers. During the pre-telecast for the Grammy Awards, a moment of silence was held for Bryant.

"As most of you may know, we lost Kobe Bryant in a tragic helicopter accident today," said interim Recording Academy CEO Harvey Mason Jr. "Since we are in his house, I would ask you to join me in a moment of silence."

NBA athletes, officials and fans mourned the loss of Bryant, who was considered one of basketball's greatest players of all time.

On Saturday night, Bryant tweeted his congratulations to LeBron James after he surpassed Bryant on the NBA's all-time scoring list, his last tweet.