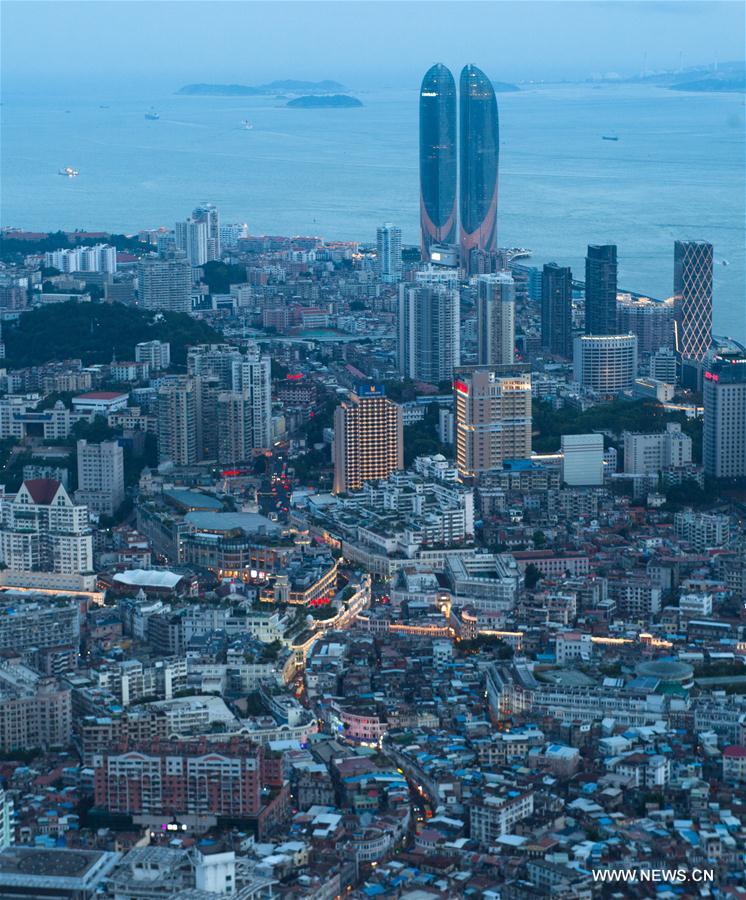 Aerial photo taken on Aug. 3, 2017 shows the night scene of Xiamen, southeast China's Fujian Province. Hundreds of streets and alleys here present the charm of southern Fujian. According to China's Belt and Road Initiative blueprint, Xiamen, the beautiful seaside city, is set to become the strategic pivot city of the 21st Century Maritime Silk Road, and it will hold the ninth BRICS Summit in September. (Xinhua/Song Weiwei)

It has been over a decade since Brazil, Russia, India, China and South Africa came together to form BRICS. The NDB itself is an "outcome of the economic togetherness" of the emerging economies group, Kamath said during an exclusive interview with Xinhua on Wednesday.

At the ninth BRICS summit to be held in the Chinese city of Xiamen in early September, Kamath will present the bank's progress over the last two years as well as the direction it is heading in the coming two to three years.

Founded by BRICS member states in 2014, the NDB opened in Shanghai in July 2015 and became fully operational in early 2016.

The first NDB-funded loan, a solar power project in Shanghai, is expected to start operation in August.

The bank is expected to approve five new projects with a total value of 1.5 billion U.S. dollars in September, with two of them in China, said Kamath.

Altogether, the bank has 23 projects at various stages of preparation for 2017-2018, with a total lending amount of 6 billion dollars. The bank granted loans to seven projects in 2016.

According to its general strategy for 2017-2021, the bank will put about two-thirds of its loans into sustainable infrastructure development.

"The growth of emerging countries, particularly the growth that we have seen in China, has clearly underlined the importance for growth to be sustainable," Kamath told Xinhua.

"I would say that we have learned from China's experience to push sustainability as a core of the lending process," he added.

The NDB is looking into more local currency financing opportunities in member countries.

After the bank's first green bond issuing in China was welcomed by the market last year, Kamath said the bank is planning another bond issuing between 3 to 5 billion yuan (450 to 750 million U.S. dollars) in the second half of this year.

He also told Xinhua that the bank will open its first regional office in Johannesburg of South Africa on Aug. 17.

This regional office will act as a "face to Africa," as it will initially focus on preparing projects in the pipeline, Kamath said.

The bank intends to open other regional offices, but the timing of this is unclear, said Kamath.